Behind these scenes I've been working on an update to the Climate Scientist Starter Kit. The new version will be 2.0. It's still a ways off, but I wanted to do a series of articles about some of the new things it'll contain. In this post, we'll look at three new datasets that will be added: Length Of Day Delta and the Solar and Lunar Ephemeris.

I've made a couple of posts already about the Length of Day Delta (LODD) (see here and here). The LODD tells us how many more milliseconds are added to the average length of day of 86,400 seconds each day.

The LODD data comes from The Earth Orientation Centre. Below is a graph of the LODD data that will appear In the new Climate Scientist Starter Kit. It shows monthly LODD data from January, 1962 through December, 2009 with a 13 month running mean added. 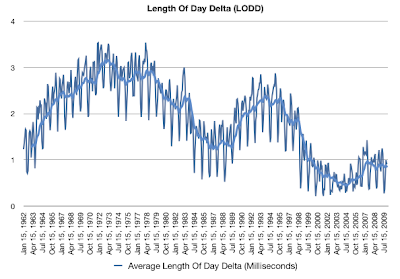 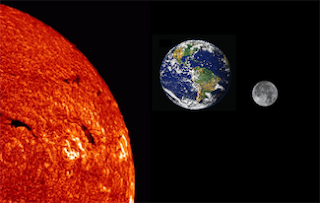 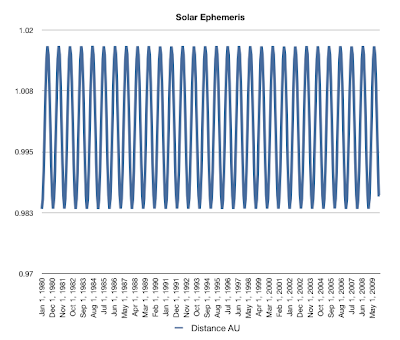 Normalized Data Included
One of the nice things about the Climate Scientist Starter kit is that it includes versions of most of the data that have been normalized to a range of zero to one. This makes it easy to compare data from very different data sets. The new data being added to version 2.0 continues this tradition. The graph below shows monthly LODD data mapped together with solar ephemeris data using the normalized version of both data sets. 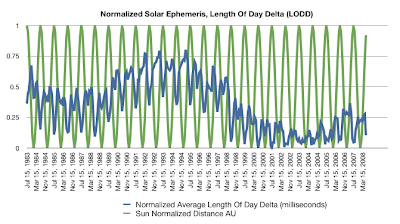 More To Come
There are many more types of data being added to version 2.0 of the Climate Scientist Starter Kit. We'll cover those in future posts. If there's something you'd like added, leave a note in the comments and I will do my best to add it.