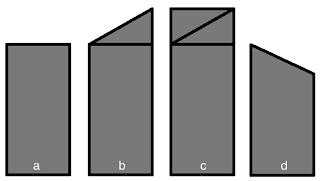 In the previous post I used some geometry to show that the January UAH anomaly of 0.72˚ is not supported by the data on channel 5, footprint 15. The idea that the area of a temperature graph can determine the anomaly may not be immediately obvious, so I wanted to show that this must be so with an informal proof. I leave formalizing the proof as an exercise to the reader.

It's important this be done because in the raw data we're working with temperatures, not anomalies. But the published temperature changes are in anomalies, not temperatures. We need to be able to switch between the two and compare the two with confidence.

For convenience, we'll say the X axis is 1, for 1 month. (Note that I used 31 as the width in my previous post. That works just fine, but I'll probably use 1 from here on out to make it easy on myself.) This means when we want to calculate a temperature area, we need only be concerned with it's height. This is because the area of a rectangle equals width times height and width is always 1.

So, for example, the temperature area of ⣿ is always ⣿.

If the anomaly at the beginning and end of the graph is some positive number ❢, then two triangles are formed both with an area equal to ½❢ and the temperature area now equals ⣿ + ❢. This is shown in rectangle c in the diagram at the beginning of this post.

So if we ever see a change in temperature area and a change in anomaly not in sync, we know something is wrong.