Trying To Find The UAH January Anomaly In The Raw Data, Part 1 Of 2

This is a two part series where we look to see if the January UAH anomaly can be found in the Aqua AMSU Level 1B data. The size of the anomaly we're looking for is 0.7˚ C. Each of the two parts of this post will use a slightly different method to try and find the anomaly.

I'll start off right away and tell you the answer for this post: it's not there. The rest of the post will show why.

Calibration With Past Anomalies, Footprint 15.
Both posts will use a method of calibrating the raw temperatures of the AMSU to published UAH anomalies for the same time period. In this post we'll look at footprint 15. We're using footprint 15 because it requires almost no statistical adjustment my the software for limb correction, so we don't have to worry about limb correction, bad data in channel 4, etc.

Calibration is done using 2 periods of published UAH anomalies. In this case, the January, 2008 and January, 2009 data are our calibration periods. We will then use that calibration information to examine the third period, January, 2010. The anomalies for all three periods were reported as: 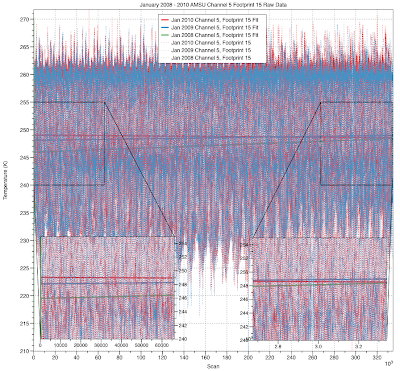 We need a way to relate the raw temperature data to the temperature anomalies. Both raw data trends are straight, so we can treat each trend as a right-angled trapizium (i.e. a rectangle with one edge not parallel) with edges at the left, right, bottom, and trend line. This, in turn, can be divided into a rectangle and a triangle. An example of this is shown below for the January, 2008 trend. 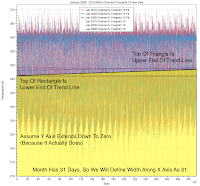 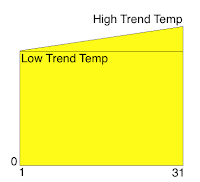 From this we can calculate the area of the the first two trends and compare their difference to the difference in anomalies over the same period. This gives us an objective scale between the area of the raw data and the anomaly for the month.

So a difference in area of 37.975 increased the anomaly by +0.35 K. Now lets do the same area calculation for 2010 and see what the relationship is.

And since the rules of geometry aren't going to change, it seems there's nothing in this channel 5, footprint 15 data to support the anomaly of January, 2010.

Edit: I used 31 as the width here, representing 31 days. In the future, I'll probably use a width of 1, representing 1 month. This'll simplify calculations.
So Does This Prove The UAH January, 2010 Anomaly Is Wrong?
No. It only shows there's nothing in channel 5, footprint 15 to support the value of the anomaly as valid. Channel 5, footprint 16 will give similar results.
Those two footprints are the ones that really don't need any statistical limb adjustment. The other footprints do. So that means the support for the January, 2010 anomaly either doesn't exist at all, or exists somewhere in those other footprints with their statistical adjustments.
Which is what we'll look at next post. I don't know what we'll find when we look there. I haven't done the analysis yet.
Previous Posts In This Series:
Overview Of The Aqua Satellite Project, Update 1 Features
Aqua Satellite Project, Update 1 Released
Spot Checking The Spot Check
NASA, UAH Notified Of QA Spot Check Findings
About The Aqua Satellite Project
UAH January Raw Data Spot Check
So, About That January UAH Anomaly
A Note On UAH's High January Temperature