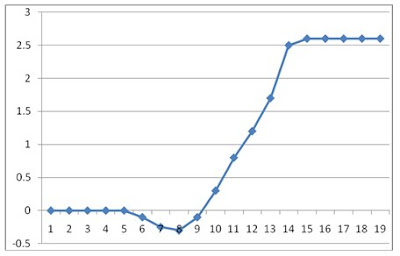 The graph presented here shows the data manipulation taking place in one example of the computer code from CRU. Many (most? all?) of my fellow climate skeptics are saying this is the "smoking gun" that proves CRU has manipulated its climate data.

I've been a professional computer programmer for over 25 years. There's several things that stood out as odd to me about the CRU code. I've been holding off posting about it until it all came together for me. I think it has now.

*) First of all, the code is written in a language called IDL. IDL is a popular language in the scientific community, including climate science. However, it execution is slow so it's not good at handling large data sets. It's also not a well structured language, so it's not well suited for building large, complex systems. Climate models have large data sets and are complex. Because of this, professional grade models usually use FORTRAN, not IDL.

*) Secondly, the code is terrible. Truly terrible. The hacked code is not in any way a professional product, but looks more like it was written by someone who either had no experience in programming beyond an introductory course or who was writing "throw away" code for some purpose other than creating a final professional result.

*) Third, the programmer knew they were a terrible programmer. In the comments in the code the programmer refers to his own lack of skill over and over again. I can't see such a person using that code to create data that would be even glanced at by a climate scientist.

*) Fourth, the data was terrible. According to the programmer who wrote the code, it was a complete mess and had to be heavily altered to get anything close to real world values. We can all say what we will about Phil Jones but three of the grants he received at CRU were for creating climate databases. It seems unlikely that he'd have gotten such grants repeatedly if his databases produced data that had no resemblance to the real world.

So what's it all add up to?

To me it seems the code in the leaked files is toy code using a toy database used to convert small data samples in a quick and dirty way without the need for a supercomputer and the programs running on the supercomputer. Nothing more.

But we'll never know for sure until CRU releases its official code to the world, allowing it to be reviewed by outside professionals.