Update:
After removing all the skeptic's comments, they've locked the page down, leaving only the believer's comments.
=======

You may have heard from Watts Up With That that a single editor had been responsible for all articles in Wikipedia related to global warming and had been editing out skeptic's views. U.K. scientist, Green Party activist, and RealClimate.org team member William Connolley created or rewrote 5,428 Wikipedia articles. His handiwork included getting rid of the Little Ice Age and Medieval Warm period and slandering scientists he didn't agree with. Connolley had his wikipedia administrator duties taken away from him in September. But that hasn't stopped him, as he's edited more than 800 articles in December alone.

But it seems there's more to the story.

According to wikipedia editor "A Quest For Knowledge", wikipedia has blocked all known skeptics from editing their ClimateGate page. Reading the ClimateGate page you can see it's little more than propaganda copied and pasted from the Huffington Post and RealClimate.

Please contact the wikipedia editors and help get the ClimateGate page up to wikipedia's neutrality standards. See below for links. 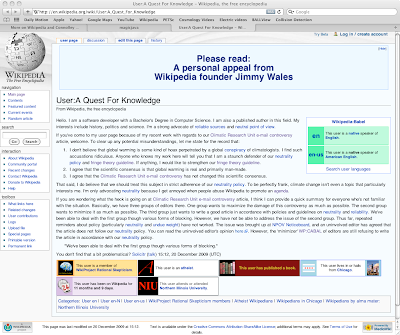 Screen grab of administrator's entry saying all skeptics were blocked from ClimateGate page.