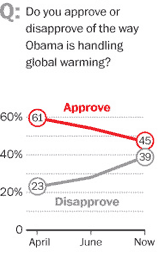 According to the Washington Post, Obama's approval rating on handling global warming has dropped below 50%. It's not clear how much of this is due to Climategate, as the "approve" trend was heading downward at about the same rate before the story broke. However, the "disapprove" trend does show an increase in growth after Climategate.

The poll was conducted by telephone Thursday the 10th through Sunday the 13th. 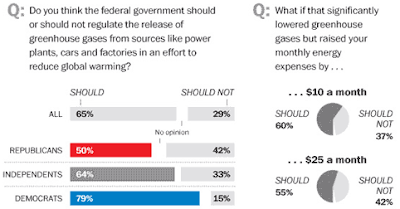 The poll showed that most people thought Obama should cap greenhouse gases by a 2-1 margin, so long as that cap didn't cost very much. If the costs to a household were $25 per month, the responses were nearly evenly split between the "shoulds" and "should nots".

According to documents obtained from the Obama administration via the Freedom of Information Act, average monthly increase in costs per household would be between $73 and $146. 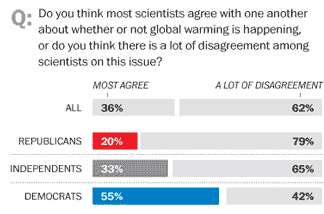 By a 2-1 margin people said they believe scientists disagree with each other over this issue.